tHe FuNnY sIdE oF cHrIsTmAs

As the days until Christmas count down, stress levels mount up and up and up, until you feel as if you’re going to blow a gasket. It’s tough to get your gasket repaired this time of year. I have no idea what a gasket is or does, but in human terms I imagine it’s the holiday flu, or the holiday blues, or the terrible two’s (like watching adults act as if they’re two again. You know: becoming sick, cranky and fussy, with a tendency to meltdown into a puddle of tears.) A powerful time of the year is upon us; Thanksgiving bustles right into Christmas. To survive emotionally, try finding some comic relief where ever you can.

Remembering memories that make us laugh is one way to feel better for a moment. A moment? Hey – one moment’s better than none. It’s about jiggling and releasing those funny memories in your brain.  Anytime you hear yourself say, “That reminds me of the Thanksgiving or Christmas when…”  you may want to write it down so you don’t forget it for another fifty years. Remember, it doesn’t matter if your memory is funny to anyone else. I do recommend sharing, because you might get somebody else laughing and sharing their funny memories. Here are some of mine.

At Thanksgiving, our daughter, Korey, suggested downsizing: “Start by throwing out everything in this house that’s broken!” I started with our 30-year old dead microwave, because heating up Thanksgiving leftovers was a drag. Okay, we’re spoiled, but we’re still in a hurry; family needed to hit the road. I purchased a microwave the next Monday; installation was three days later. It’s great having a nuker again, except its position to the adjacent cabinet prohibits no more than a 45 degree door opening of this model. I’ll have to fold a pizza, I guess.  I texted Larry, the installer, to (1) thank him for his service and (2) ask, “Do microwaves ever open from the other side?” Here’s the text I received:

I began laughing, then crying from laughter. You know, “Craughter.” It was awesome. I thanked Josh for the advice and the laugh. He said, it wasn’t a problem and to have a good day. Did I EVER!

A co-worker is trying to pull off “Elf on the Shelf” for her four-year old daughter by posing Skittles in different household activities nightly. Skittles is the elf’s name. I had no idea that they must be named. Anyway, one morning last week, Madelyn ran to Mom to report Skittles had been in the flour bag and was just a white mess. “Skittles is soooooooooo sh*t!” she said.  “EXCUSE ME?!?!” said Mom. “Skittles is soooooooooooo sh*t!” Madelyn said again, bubbling with giggles.  Mom searched madly for a better word. The word. The right word.  “Do you mean “SILLY?”  And Madelyn replied, “Yeah, Skittles IS silly!” 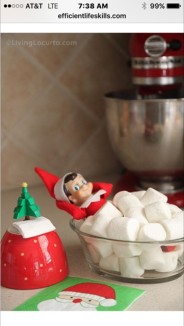 Another co-worker’s grandson had shopped at their church’s children’s bizarre. Anderson proudly announced he’d purchased a pencil eraser for his one-year old brother. And a ruler for his mom. That reminded me of the one Christmas, my kids picked out peach-colored golf socks and an O.D. green puffy headband for me. I wore the socks a lot.  The headband?  Not so much. I wish I’d kept both items, because the combination makes me smile every time. Finally, co-workers were sampling a Kris Kringle exchange gift of Goat Milk hand lotion. It smelled horrible. Then one of the guys tried a dab, and said, “It’s not baaaaaaaaaaaaaaaaaaaaaaaaaaaaaaaaad!” An answer with which any goat would be impressed.

Have a great pre-holiday week and remember to jot down your funnies so you can enjoy and share them this an every holiday season. It will help, I promise.